Over the next four days, my 12-year-old daughter and I will be biking to Washington D.C. with four other riders from Pennsylvania Interfaith Power and Light, an organization engaged in a faith-based response to climate change. The ride is aimed at raising awareness about the need for action on the climate. 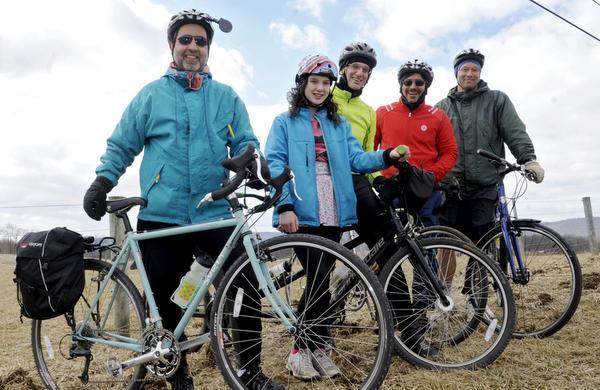 I’ve asked my friends and social network to consider supporting our effort in two ways. If you have a good understanding of the climate issue and the need for action, consider making a contribution to PA-IPL or to support its excellent work, or sharing your thoughts and prayers about climate change for my daughter to deliver to our congressional representatives. You can find out how to do that at the PA-IPL page dedicated to the ride.

If you need to start from scratch and want a quick primer on the basic scientific ideas involved in climate change, the group of climate scientists who blog at RealClimate.Org have put together this excellent list of resources that can bring you quickly up to speed.

From my point of view as a scholar working in science and technology studies, beyond having a grasp of the basics, rather than trying to learn a lot more of the science (i.e., pouring over IPPC reports), I wuld encourage people to learn more about the science – how do scientists know what they know? what is the larger historical and social context? In this connection, I can recommend two excellent books.

The first is The Discovery of Global Warming by historian of science and physicist Spencer Weart. It’s a short book, very readable, and gives a compelling account of how scientists from diverse different fields gradually forged the conceptual framework of climate against the larger social context of an emerging ecological consciousness that recognized it was possible for human activity to have an impact on global natural systems. Weart has also put together an incredible website with separate historical essays that go into topics in more depth, and link to the key primary documents in climate science.

For those a bit more ambitious, I would recommend Paul N. Edwards’s A Vast Machine, a fascinating account of computer models, climate data and the politics of global warming. Edwards documents and analyzes in far greater detail than any climate change denier ever has all of the complexities and uncertainties of gathering, storing, and communicating basic data about the climate, but shows how climate scientists have developed computational and conceptual tools for working that data into increasingly consistent and reliable climate models. He concludes with an argument about why climate science has been so politicized, and how such knowledge could and should be used to inform policy.

Crucial to understanding the “controversies” that have surrounded climate science is to understand the world of climate deniers. Merchants of Doubt by historians of science Naomi Oreskes and Erik Conway shows that the same small circle of scientists who, with funding from the fossil fuel industry,  have opposed the consensus of climate science concerning anthropogenic climate change, had earlier, with funding from big tobacco companies, opposed the scientific consensus about the health risks of smoking. The connecting threat was an ideological commitment to free market economics that led them to oppose any scientific research that made some form of regulation seem necessary.

If you’re all good on the science, but aren’t sure why you should care, I’d recommend the work of environmentalist Bill McKibben and his activist organization 350.org. You can find many of McKibben’s essays online, but I’d recommend his essay on “Global Warming’s Terrifying New Math” as a good overview of why we should be concerned. His book Eaarth: Making a Life on a Tough New Planet is a clear sighted and, by the end anyway, a surprisingly optimistic vision for how societies might adapt as the effects of climate change unfold.

Finally, for a religious perspective since we are riding as part of a group motivated by their faith, the website for the national Interfaith Power and Light (of which PA-IPL is a chapter) provides some excellent resources. Virtually all faiths have mounted a response to the moral challenge of climate change. As a Catholic, the Catholic Climate Covenant’s website as pulling together many documents and resources from a Catholic perspective. And on our trip, which will include several stops at churches along the way, I’ll be reading Sacred Acts: How Church’s are Working to Protect Earth’s Climate.

If it’s self-indulgent to write a blog (and it certainly is), it’s doubly self-indulgent to apologize for failing to keep up with it. But to the extent that returning to the task of regular blogging is going to be worth anything to me or my imagined readers, I feel that I need to begin by explaining the long absence – especially since the point of this blog was to chronicle and thus focus my thoughts on the development of my second scholarly book project on the history of Alzheimer’s disease. Letting the blog drop seems like a bad sign regarding the prospects for that book. And, to be triply self-indulgent, dammit, I intend to write that book and more!

So, the obvious and unfortunate thing to say is that the blog has not gone dormant because I’ve been all on fire with research and writing. Rather, my time and energy has been absorbed with the usual sorts of things that keep mid-career academics from research and writing – teaching and administrative demands and obligations to family, friends and the wider world. Plus, for me, there has been the additional challenge and anxiety of trying to figure out my job situation in the wake of Penn State’s elimination of the Science, Technology and Society Program in the face of state budget cuts. At this point, my future at Penn State remains unclear, and the academic job market is tough even (or perhaps especially) for a mid-career academic, even one who has published a well-regarded book.

But I am starting to question whether it is helpful to characterize all these things as mere distractions that take me away from my work. At this point, I think the only way I will be able to move forward with this project, my career and my life is to think about how  all these seemingly disparate demands and desires are connected. That’s perhaps obvious. Tracing the connections between individual experience and larger structures and meanings in society unfolding in time has always been the attraction for me of historical inquiry. My first book argued that the experience of dementia and the diagnostic category of Alzheimer’s are not only a personal tragedy and a medical concept, but are connected to a profound historical transformation in the meaning of selfhood and the politics and policy of disease in an aging society. More broadly, understanding the way that my individual struggles and occasional triumphs are connected to the wider world is essential to living a conscious, good life. But it’s no less challenging for being obvious. The tendency to ignore or obscure such connections has become perhaps the defining feature of late capitalist society.

All of which is to say that as I turn my attention back to this blog, I will be moving away from my original intention of keeping it focused strictly on my work on the recent history of dementia and Alzheimer’s. I’ll continue to write plenty about that as I continue to follow the field and hopefully do begin to make some progress in framing and research the book. But I’ll also be blogging about concerns ostensibly far afield from dementia that draw or demand my attention – like climate change, or global poverty, or the political economy of the modern research university, or biking or music – and about how they all might somehow link up on the faith that wherever my work and my life take me from here, it will be the richer for the inquiry.

As the working title of my book, To Conquer Confusion describes both the ostensible goal of finding an effective treatment or prevention for Alzheimer’s and other dementias, and the challenge of creating and maintaining coherent intellectual and institutional frameworks that could connect and coordinate the diverse experiences, interests and efforts of the many different kind of people connected to each other in the dementia field. As the title of my blog, To Conquer Confusion will also describe my own struggles to develop this work while answering the conflicting demands of life.

Author of Self, Senility and Alzheimer's Disease in Modern America (Johns Hopkins, 2006). Co-editor of Concepts of Alzheimer Disease: Biological, Clinical and Cultural Perspectives (Johns Hopkins, 2000) and Treating Dementia: Do We Have a Pill for It? (Johns Hopkins, 2009). He teaches courses in bioethics and the history of health care in the Health Administration Dept at Drexel University.